Slander – the Leprosy of the 21st Century 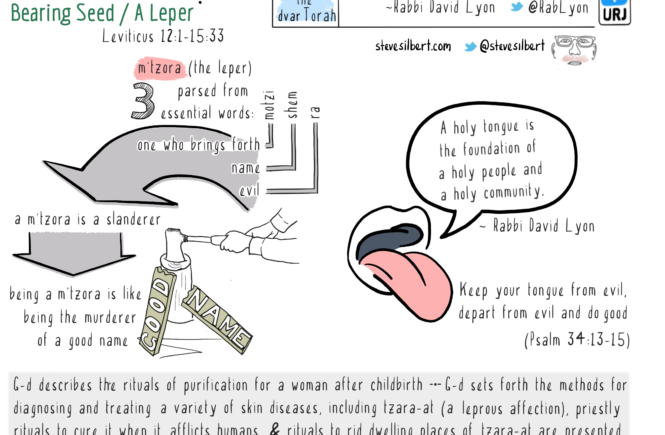 The double Torah portion Tazria-M’tzora is a challenge to visual thinkers. It focuses not only on leprosy but also hits on childbirth, and “fluid discharge” for both men and women. Whew! Now that I’ve addressed the elephant in the parsha…

Origins of the Hebrew word m’tzora

Rabbi David Lyon helped me out quite a bit with his dvar Torah Finding Unique Blessings in Every One of Us by outlining that the Hebrew word m’tzora (literally “leper”) originates from three Hebrew words – motzi (“one who brings forth”), shem (“name”), and ra (“evil). Put them together and you find that the leper is synonymous with “one who brings forth an evil name”. The leper is the slanderer among us.

An old Chasidic tale tells of a man who went through the community spreading lies about the Rabbi. One day the man felt remorse and asked the rabbi to forgive him and indicated that he was willing to do anything to make amends. The rabbi told him to take several feather pillows, cut them open and scatter the feathers to the wind. The man did so and returned to the rabbi to let him know what he had done. The rabbi then instructed him, “Now go and gather ALL of the feathers.” The man protested, “But that’s impossible.”

“Of course it is,” replied the rabbi. “And although you may regret the evil you have done and truly desire to correct it, it is as impossible to repair the damage done by your words than it is to recover every single one of the feathers.”

Slander is akin to murder

The Talmud teaches that destroying another person’s name through slander is akin to murder and like murder the damage is irrevocable.

In the age of going viral on Twitter it’s best to remember that posting falsehoods with the goal of destroying a person’s name makes you a slanderer, a leper that should be cast out from society for the good of that society.