The Shuhari of Keeping / Be-ing Kosher 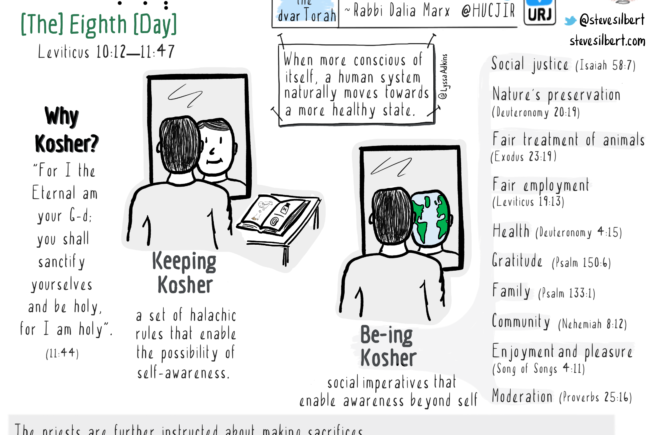 Parsha Sh’mini II is a quintessentially Jewish part of the Torah, detailing what can and cannot be eaten. You’ve heard of these rules if you’ve ever heard the word “kosher.”

If you follow these rules in their literal sense it’s called “keeping kosher.” Rabbi Dalia Marx issues a challenge that while “keeping kosher” is certainly an acceptable practice, maybe there’s a different way to look at eating. She has assembled excerpts from across the Tanakh to support a set of guidelines around eating as a set of social imperatives.

The Japanese concept of Shuhari, which tends to pop up during Agile coaching sessions, teaches of three stages

None of these stages is necessarily better or worse than the other.

Does Rabbi Marx pose that “be-ing” kosher by living a coda that couples social justice and the best of humanity is the ri stage of the shu of keeping kosher?

Don Beck’s theory of spiral dynamics talks of a similar type progression in the corporate world. As a company evolves its world view shift and the norms of that corporate society necessarily evolve to match the new world view. Corporate culture evolves from that of being order-takers to revelation of the world outside to being a culture of tikkun olam (literally “repairing the world”) where every decision is made with its impact on the world in mind.

Lyssa Adkins, in a keynote given at Scrum Gathering Ireland in 2017, said that “when more conscious of itself, a human system naturally moves towards a more healthy state.” That’s a movement beyond “keeping” and toward “be-ing” that can be applied to anything in life.