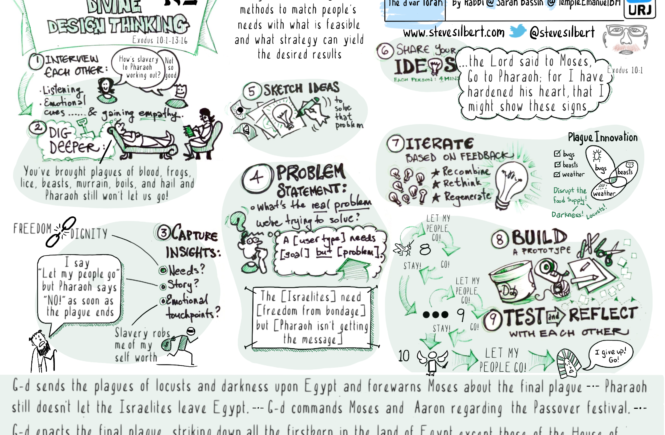 This week’s Torah portion is called “Bo” [Go]. It culminates the Ten Plagues and ends with the slaying of the first born Egyptians and Pharaoh’s acquiescence to Moses’ demands to the let the Israelites go.

This is my second consecutive sketchnote based on a d’var Torah by Rabbi Sarah Bassin of Temple Emanuel in Beverly Hills. Because of the topic of her d’var Torah I decided to try something different. But more on that later.

In “Thinking Big and Failing Fast“, Rabbi Bassin poses the possibility that maybe the Creator didn’t have it all planned out from before the plagues started to harden Pharaoh’s heart. Instead, maybe the Creator applied a process that we in the innovation world call “Design Thinking” to iterate through what would be needed to inflict minimal pain on Egypt but still end up with the Israelites being set free.

Design thinking is a human-centric process that uses empathy (human-centered), ideation (brainstorming to generate lots of ideas) an experimentation to rapidly come up with new approaches to old problems. [read more about Design Thinking]

And now for something completely different… 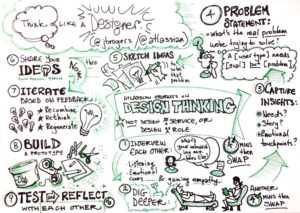 I decided to try something different with this sketchnote. Instead of starting from scratch, I connected with my friend Ben Crothers, author of “Presto Sketching: The Magic of Simple Drawing for Brilliant Product Thinking and Design“. Ben had created a sketchnote on Design Thinking based on a talk called “Think Like a Designer” by Jay Rogers. I floated the idea of a remix and mashup. Ben agreed.

To be transparent, in the beginning neither Ben nor I fully bought into Rabbi Bassin’s concept that G-d didn’t have it all planned out in advance, but we decided to go with it an see what popped out.

With a high resolution image of Ben’s sketchnote I started the surgical process to cut, paste, and reorganize the images into a more generic flow. With the first hack complete I was able to stop and look at the revised sketchnote, the Hebrew text, and Rabbi Bassin’s d’var Torah and think about possibilities.

Turns out that the idea of G-d as the Divine Design Thinker actually makes sense. 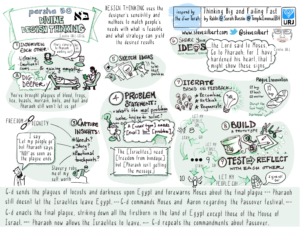 The next step was to complete the visuals in the sketchnote by channeling my inner Ben Crothers and trying to fill in the blanks in a style he might use. I’m pretty sure that I didn’t fully channel Ben, but rather moved my style a little closer to his for a short time.

Finally I added the headers, Hebrew text, the english fonts, a summary of the parsha, and background.

If you’ve seen sketchnotes by Ben and me, you can see each of us in the sketchnote resulting from this hack & remix.

Thanks go to Ben for giving me free license to shred his work for this experiment.