Vayigash – a Lesson in Choices 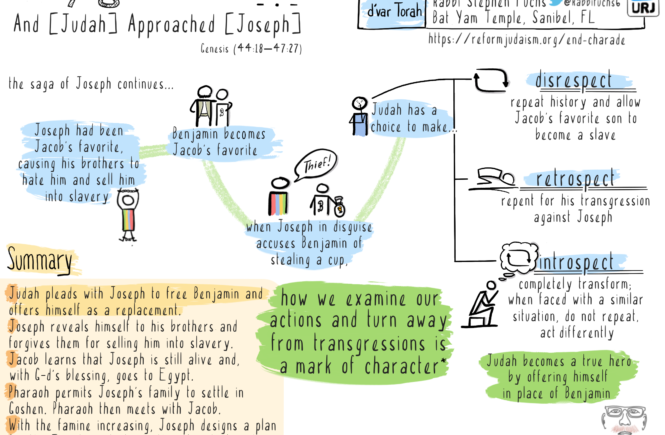 The Torah portion Vayigash continues the story of Joseph and his family. In this parsha, Joseph plants a cup in Benjamin’s bag then accuses him of stealing. While much could discussed around this actions, my focus this time is on the the choice put before their brother Judah.

Judah has a choice to make. He could simply walk away from his brother as he did Joseph. He could have acknowledge what what he did to Joseph was wrong and still allow Benjamin to become a slave. Or, he could not let history repeat itself.

We have a father, an old man, and a child of his age, a little one; and his brother is dead, and he alone is left of his mother, and his father loves him..

Joseph gets so choked up that he ends up revealing his true identity to his brothers.

How Do You Make Choices?

Rabbi Stephen Fuchs talks of these choices in his d’var Torah An End to the Charade. He talks of Judah becoming a ba’al teshuvah shelemah, a master of complete repentance by rejecting transgression in what can only be called a heroic response.

Character and integrity are built upon introspection and making better choices as we become more wise. Your choices are one of the few things that no one can take from you. No one except you can force you to make bad choices. How do you make choices?