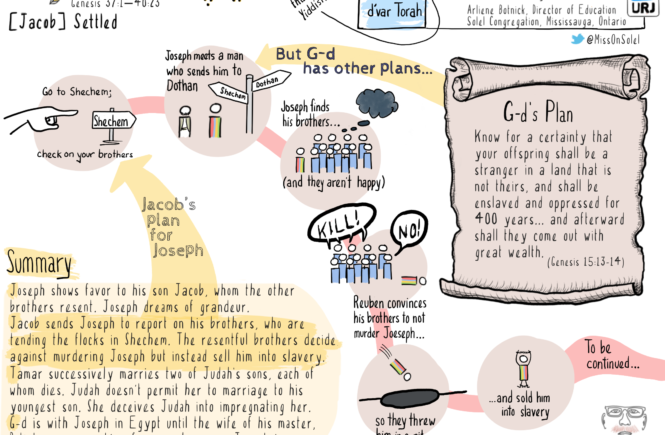 The Best Laid Plans of Mice and Men

Robert Burns writes eloquently in his poem “To a Mouse” that “The best laid schemes of mice and men go often askew, and leave us nothing but grief and pain, for promised joy!”

To an extent this poem is an analog to the Torah portion Vayeishev, which centers around the story of Joseph. Joseph is given a coat of many colors by his father Jacob (a.k.a. Israel) as a sign of favor. His brothers are resentful of him and Joseph carries his favor in a somewhat arrogant manner. Jacob

There is an old Yiddish expression “Der Mentch Tract un Gott Lachts” which translates to “Man plans and G-d laughs”. In her d’var Torah on Vayeishev, Arliene Botnick, Director of Education at Solel Congregation, Mississauga, Ontario, talks of the balance between the two forces—man’s free will and God’s plan— in shaping our destiny. She says that “What appears to be a human intent, Jacob’s decision to send Joseph from the valley of Hebron, is an unfolding, as well, of God’s plan.”

In the case of Jacob, he sends his favorite son into the wilderness to find his brothers and report back to his father on their doings. He’s expecting this to be a simple task ending with Joseph comfortably back home.

The Creator has other plans that have implications to this day. Those plans begin to reveal themselves in Vayeishev (Genesis 37:1-40:23). By the end of this portion, Joseph has been sold into slavery and Jacob believes him to be dead.

… and the plans unfold further in the next Torah portion.