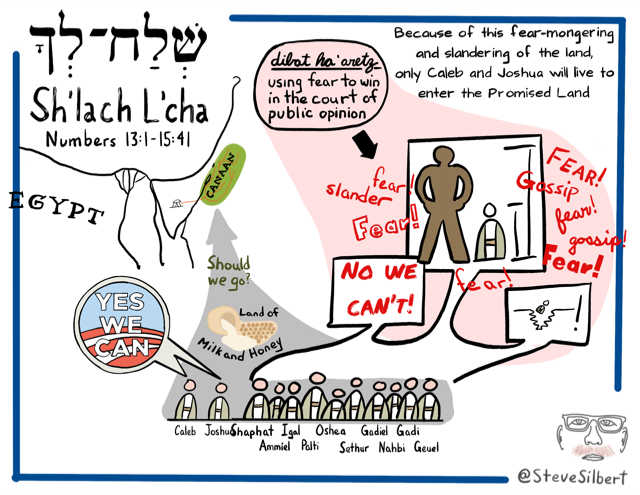 Who knew that if you only took the time out to read and think, you would find that the problems we have in society today existed millennia ago!

Sh’lach L’cha talks about, among many other things, fear-mongering and slander and their impact on the court of public opinion. The reaction of the Israelites to the fear tactics used but the majority of the spies that Moses sent into Canaan to scout the land was that they lost confidence in their leaders, lost faith in their purpose, and decided they were better off back as slaves to a tyrant. Change a few names around and you have our modern American dynamic. Segments of our society use fear to put and keep us in control.

The Israelites had not yet rid themselves of the memory that they themselves were slaves in Egypt, and so were easy to sway. The Israelites, for their loss of faith and for the spies’ fear tactics, are told by G-d that none except Caleb or Joshua would be around to enter the Promised Land.

Harsh? Maybe. But what lesson can we pull from the story?

Speak with facts, let the facts tell the story, and all will work out as it should. If you speak with fear, lies and slander, the consequences might be severe.