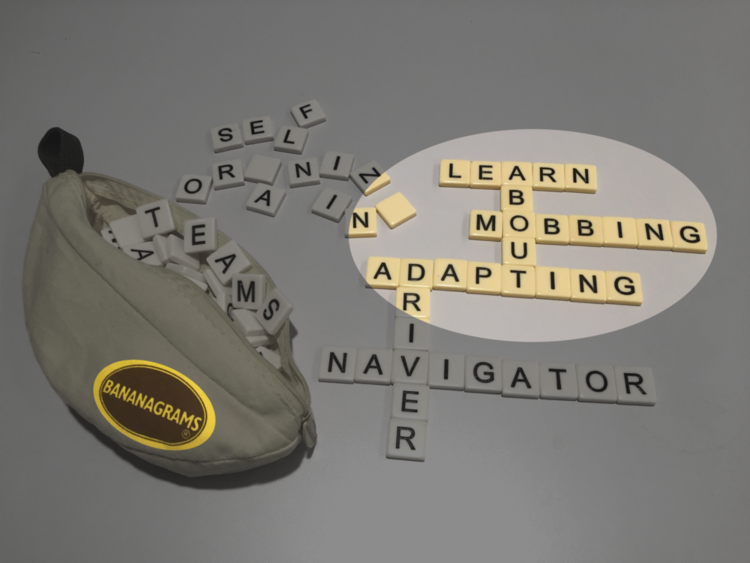 Bananagrams is a word game wherein lettered tiles are used to spell words. The object of the game is to be the first to complete a word grid after the pool of tiles has been exhausted. Bananagrams uses elements of both Boggle and Scrabble. It’s similar to Boggle in the sense that game play is simultaneous, yet players build interlocking puzzles similar to those in Scrabble. Because Bananagrams can be played by players at any (English) reading level, the game is useful for multicultural teams.

I’m always looking for new ways to teach agile concepts that are engaging, not forced, and just plain fun. I recently found Jumbo Bananagrams. These are the same as regular Bananagrams except that the tiles are super-sized and rubberized. It got me to thinking that there’s got to be a use for them in coaching teams. So without further adieu, here’s my take on using Bananagrams to enable a fun conversation about self-organizing and the principles and practices of mob programming

Number of Players. Using a team-based approach, break the larger group into up to eight teams of four people each.

Duration of Play. The duration will vary based on number and size of teams. For a benchmark, a full game for two teams of one person each takes around 25 minutes.

How to Play (Rules for the real game of Bananagrams)

Learning Strategy. Here are approaches to the game that could be taken to help teams learn about mob programming or self-organizing teams.