World of Tanks and the Art of Self-Organizing Teams

If you the term “noob” is unfamiliar, please go here and read; then come back.

We talk a lot about self-organizing teams in the agile world. It can be a dry discussion and we sometimes tune out and give up on getting better. I’ve found that the best way to get your team past being del-organizing noobs is to find an approach that resonates with them and embrace it. Thus started my experiment with World of Tanks.

World of Tanks is a massively multiplayer online game with 12-on-12 team vs. team gameplay, where each player controls an armored vehicle (which may be a light, medium or heavy tank, tank destroyer, or self-propelled gun). The player takes control of a single armored vehicle of their choice and is placed into a battle on a random map. The player has control over the vehicle’s movement, firing, and can communicate with other players through several preset actions that give tactical instructions visible to their team only or by voice chat. A match is won either by destroying all vehicles on the opposing team or capturing a base present in some game modes.

Yes, everything in our life somehow makes it back to agile. World of Tanks is actually a sociology of self-organized teams.

Individual contributors are useful to the team.

Before the game starts each play picks their weapon of choice. This will determine the role that they play in the game. Because players have options, players pick a role that they are passionate about. Players can be scouts, artillery support, heavy tank (hunter/killers).

It’s how these individuals work together that determines success or failure.

What’s the Definition of Done? 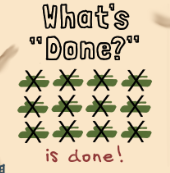 One nice thing about these types of games is that “done” is a universal definition that needs little explanation. In World of Tanks, “done” means that all enemy tanks are gone or one team has captured the other team’s flag.

Universality of “done” is something that we should all strive to attain with our teams. It sets the stage for not only knowing when you are finished but also the path that the team will choose to get there from here. 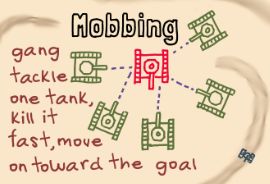 At the start of the game the team of twelve naturally splits into three or four smaller groups moving in different directions toward the enemy or to defend the base.

At times during the game the small team will come across a threat. They naturally come at the enemy from several directions and focus on the same threat, at the same time, in the same space. The rhythm ends up with the players alternating fire. In this way, not only is the enemy tank destroyed, but since he has to focus in multiple directions no one is injured in the process.

“The counter to a mobbing tactic is to simply run away, if you keep moving they can’t position them self for a flanking attack like that, however you might get a shot or two into your ass, that’s the downside, better than dying though.” ~ TankNutDave (gamer)

Enabling our teams to focus as a team on one thing at a time will improve team confidence, helps to cross-skill within the team, and deliver better products faster.

We produce better products faster when we play as a Team.

The biggest advantage that a team might have would be if all team members talk with each other constantly during a game. When this happens the team will rarely lose, regardless of the skill level of individual team members.

Unfortunately, most people don’t play with established groups of people but rather as individual contributors temporarily assigned to a random team for a specific battle lasting no more than 15 minutes.

While the gameplay of “randoms” is less effective than an established team that is used to working together, “randoms” still communicate and work together. Players observe the battle around them, watch the actions of nearby tanks, look for enemy tanks, and adjust their movements.

When we understand the context of our product we frequently innovate to produce better products than desired.

While observing what’s around you is important, context and situational awareness become key to survival and winning the game. Continually looking at the overall battlefield map for a real-time status of not just your small group of tanks but the entire team, the enemy team, and progress towards the goal of capturing the enemy base provides the understanding of the local action and how it fits into the entire battle is the key.

No panic necessary. We react to change without adding chaos.

This game is all about map awareness, when you are working together with other people it pays off to keep an eye on the map. When the situation changes, players pivot their vehicles and collectively face the new threat.

Visual radiators, roadmaps, burn-down charts and other tools used to help teams know where they are relative to where they committed to be are crucial to the high performing team.

“You know you are in the wrong place at the wrong time when shells start exploding around you. If that happens, find cover quickly or die.” ~NoGear (combat veteran and World of Tanks gamer) 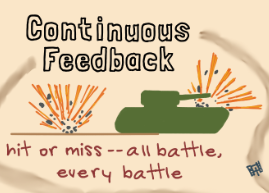 The key to not being in the wrong place is found in the feedback you get from the game, your tank, and teammates. If you in an open field rolling up a hill, you are both exposed and moving very slowly. If someone sees you, you might as well put down the controller and take a few moments out to get a beer from the refrigerator. Do be there and you won’t be a visible threat to the enemy. Choose the correct target and place yourself and your teammates in concealed positions. Call out threats ad prioritize them, then focus your fire and mob the threat. 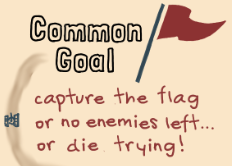 “If you have sought cover without setting the goal for it, you’re just playing as a drone and waiting for something to happen. You just end up sitting as a noob in a bad location and not being useful for the team.” ~ TankNutDave (gamer)

Being useful to the team means planning ahead by setting goals for yourself and the team. Knowing what road to take to get to the enemy base or the most likely routs that enemy tanks will take will keep you from being that dumb kid slowly going up a hill in an open field.